Letʼs be careful out there

I watched Itʼs the Great Pumpkin, Charlie Brown tonight. I never noticed before that when they go trick-or-treating, all of the Peanuts kids are wearing rubber gloves.

Agree, and be ignored

The ITV News app does not allow you to reject cookies. Not even optional ones. The only choice you have is to agree to its folksy question “You ok [sic] with our use of cookies?”

But, wait — it gets worse. Even if you accept the cookies, all that happens is the over-friendly “Agreed!” button gets greyed out. You never actually get to proceed to the ITV News app.

As the Brits say, it's “not fit for purpose.”

This LED pylon was a big deal when it debuted 20 years ago. Even though it only showed promos for WLS-TV news, it was considered a major work of public art, which is why it was allowed to take up space on a public sidewalk.

The last time I checked on it was in 2017. It was broken then. It was also broken today, when I checked on it again in 2022. I can only hope that I just have bad timing, and it hasn't been broken for five years. State Street is already a lot shabbier than when I lived a few blocks away. 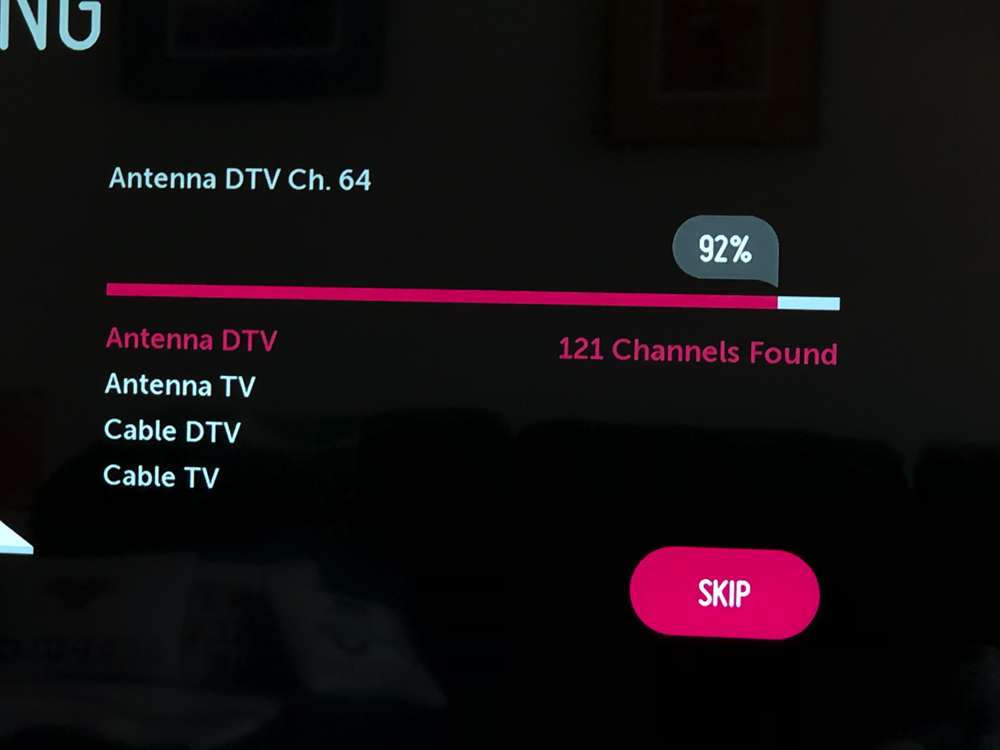 I finally got around to fixing up the over-the-air antenna hooked up to my TV. I re-scanned and found 121 channels.

Not all of the channels are great. But that's no different than the DirecTV service I have in my apartment, for which I am obligated to pay $80 a month. Except that the majority of the dross over the air is shopping channels and infomercials, while DirecTV seems to be 90% pornography, sports, and also shopping.

The important thing is that with the over-the-air antenna, I get The! Movies! Network!, and MeTV+. I've also discovered a channel that is mostly British and Australian DIY and lifestyle shows, like Escape to the Country, of which Darcie and have long been fans. Going to have to rev that $20 ATSC DVR into high gear for a while.

Here's a table of what I found, mostly for my own reference, and subject to change with a shift in the wind.

If you're viewing this on a mobile phone, you won't be able to see the table until you hold your phone horizontally. That's because tables look like absolute pants on phones.

Itʼs nice to see a TV station with a streetfront studio. They were in fashion in the 1990ʼs, and most large markets had at least one. They were a way to showcase the station in high-traffic areas, similar to the way big consumer brands like Starbucks, Hershey, and Nokia build flagship stores on busy tourist streets to serve as 3D interactive billboards.

The first one I saw was at KSDK/Saint Louis in 1994. Chicago is a walking town, so by the early 2000ʼs, several radio and television stations built their own. WLS-TV, WMAQ-TV, WBBM-TV, and WGN radio all had them. WKQX radio had one in the Merchandise Mart, but since the Mart doesnʼt have much of a street-level presence, it faced inside, where all the office workers could see it. WLUP radio and WFLD television each did something similar at Michigan Plaza, but while the radio stationʼs version was well done, it was hard to find. The TV station never really pulled it off. Even Loyola Universityʼs WULW/Chicago, and its student TV station had a streetfront studio.

The last time I checked, both WLS-TV and WBBM-TV have let their former showcase spaces deteriorate, and theyʼre not much of a draw anymore. WGN radio was still using its space in Tribune Tower extensively, but no longer 24 hours a day. WGN had an interesting gimmick where a microphone was suspended outside of the studio, and the talk show hosts would occasionally engage members of the public.

A similar setup was featured in a Tony Hillerman book, outside of KNDN/Farmington. Itʼs possible that it was real, since the Hillerman books tend to be more fact than fiction.

When I was at WGN-TV we longed for a streetfront studio, like the big stations downtown. But we were way out in North Central, pretty much half-way out of town. When WGN radio opened its showcase studio, we were jealous, since the space next to WGNʼs studio was originally designed to be a TV studio, and itʼs where WGN-TV was located until it moved out of downtown in the 1960ʼs. We always thought that space should rightly be a TV studio again, especially with all of our competitors opening shiny new studios all over downtown.

That never happened, because the people who owned the TV station at the time thought the prime downtown location was better used as retail space, then a museum, then retail space, and then left empty.

The picture above is KHOU/Houstonʼs downtown streetfront studio, and the woman in front of it is anchor Shern-Min Chow. We worked together for about five years, and she was always nice to me, but I donʼt think sheʼd remember me, so I didnʼt say hi.

When I was at KHOU, we prided ourselves on the fact that we were the only TV station downtown. All the others were half-way out of town, and when important things happened, we were usually better positioned to get to the news before everyone else.

Since then, KHOU has moved even farther away from downtown than the other stations. Its main studio is in the Galleria Area, but at least this satellite studio gets daily use. The only TV station that does local news thatʼs farther away is KIAH/Houston, but its news product is a very faded shadow of what it was when I was there.

I made a wrong turn at Albuquerque

Not only do people spend weeks riding their horses to Houston each year, the local TV news monitors their progress.

Sometimes Annie watches Star Trek with me. Itʼs no surprise; all the ladies love Riker.

Since every single story on NBC Nightly News is labeled “Breaking News,” I wonder what the producers will use when thereʼs actual breaking news to report.

Being unemployed leaves you with no money. Not having money means youʼre poor. That was easy.

This feels like a think piece put together by a Northwestern grad whoʼs never been poor.

Shout out to Sony

In 1986, the idea of a television that fit in your hand was so futuristic and dystopian that The Art of Noise used it in the art for an album cover.

Today, we have supercomputers in our pockets and on our wrists that can access video in real-time from any country on the planet.

What happened that itʼs not considered scary anymore?

I think itʼs very telling that our society calls immediate video delivery “on demand.” Back when VOD started in the 80ʼs, we called it “on request.” Now itʼs no longer a request, itʼs a demand.

Our society has not improved over time.

I watched NewsNation today. For a Tribune product itʼs not bad. Itʼs not good, but itʼs not people screaming at me for an hour telling me that Iʼm going to die. Itʼs like a newscast on mood stabilizers. Remember the early days of CNN when you would just turn it on and let it run in the background and kind of dip in and out? Thatʼs what NewsNation is for.

The cable is out. Itʼs not like thereʼs a presidential election going on and I might want to watch CNN or anything.

Good thing I also have an over-the-air antenna. CBS News, here I come.

Is it a boutonnière or a stick pin?

This is why being a weatherman in Las Vegas is the easiest job in broadcasting.

Tonight I watched Jeopardy on TV. The following things are true:

Amazon lost another one of my packages. Really lost it. Itʼs so lost that Amazon doesnʼt even know which warehouse was supposed to send it to me.

If Amazon was a person, it would apparently be very embarrassed because it proactively refunded my $16, plus ten bucks for being stupid.

Fortunately, it wasnʼt anything important; just some electronic circuits so I could occupy my brain. Iʼll watch Antiques Road Trip on TV until I can order more.

Some of the recordings on my DVR are so old, the people in the commercials arenʼt wearing masks yet.

I miss the trees of Texas.

I miss a lot of the natural things of Texas. The Brazos River. The Spanish moss. The 5:00am humidity that turns the skyline into a grey silhouette just before sunrise. The marshes of Jackson. The swamps of Orange. I think the common thread is the moisture.

I miss moisture. I sometimes watch British “lifestyle” television shows (Bargain Hunt, Flog It, Coast, Countryfile, etc.), and it always seems to be raining there. The people on the screen donʼt seem to notice it, but I just marvel at all that water. All those trees. All that moisture.

Itʼs been about 200 days since it last rained here. Monsoon season should start in a few weeks to deliver our two inches for the year. When it rains, I often join my neighbors outside and we stare into the sky like confused turkeys.

I needed a pencil eraser to clean some electronics today, and I found this.

I donʼt remember being given any WB39 News pencils to bring home from the newsroom, so I must have borrowed this one. Iʼll totally bring it back the next time Iʼm in Houston.

I just slogged through an episode of Good Eats: The Return on Food Network Go.

There were 26 commercials for just two recipes!

I hope Alton Brown got a new car out of it, since I had to watch the same Enterprise Rent-a-Car commercial seven times in a row in one break.

Bull from Night Court and Lennie from Law and Order in the same 1970’s space monster soap opera.

I don't remember the bars in Cincinnati serving complimentary apple pies when I lived there.

Wikipedia has 1,408 words about historical inaccuracies in the children's television show F-Troop.