Today I had the misfortune of trying to use Starbucks customer service. I donʼt know which middle manager got a big bonus out of this scheme, but do hope that someday that person has to use the system he set up. Itʼs a masterpiece of outsourcing failure.

I placed the order again. Once again, the receipt came immediately. Then the same automated processing failure letter.

I tried once more, the next day, with a different payment card. Same story.

After being transferred three times, and reading the order number to three different people, I was finally informed that all the people who answer the phone are allowed to do is send an e-mail to another department letting them know that I'd like to place an order.

Eventually I received another e-mail from Starbucks “customer service:”

We were unable to reprocess your Gift Card order.
However, if you are still in need of a gift card we recommend replacing your order.

Good idea. As suggested, I “replaced” my order. I replaced my Starbucks gift card order with one for an Amazon.com gift card.

Memories of life in Seattle 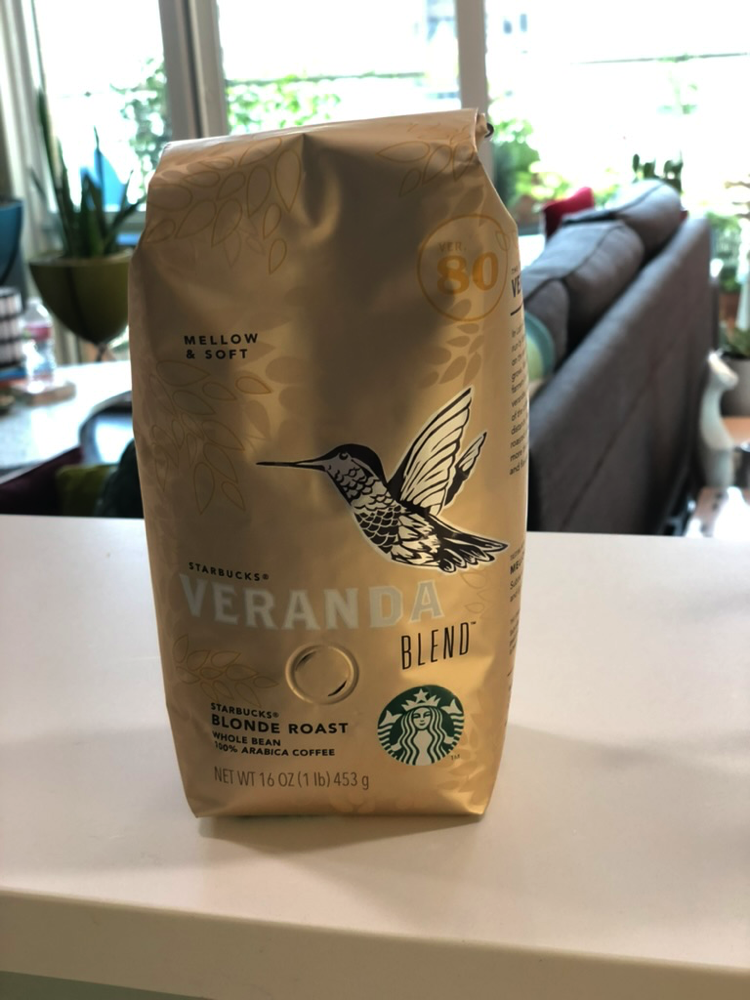 The coffee of the day is Starbucks Veranda roast. I got this bag for free with my wife's Starbucks points/stars/thumbs/whatever. It's very hard for free coffee to be bad, so it must be good.

My memory is that Starbucks used to have a Veranda coffee, and a Blonde coffee. This is labeled both. I know that blonde is a type of roast, so I'm a little corn-fused here. Maybe Starbucks comnbined the two products into one to cut down on SKUs.

I went for a walk to Starbucks today. No more masks. Not even signs for masks. Clearly there is a hazard, since the employees are still masked and hiding behind toll booth-grade plexiglass. But the rest of the store? Come on in! Sit and and stretch out! Stay all day! Go ahead and take your boots off and dig at your blackened toenails with a Bowie knife, weʼre all friends here!

I should have known it was a bad idea when I opened the door to my apartment and there was a black widow spider standing there. Not a female like we all know from the Batman TV shows. But a male black widow, which is larger, skinnier, and looks like a homeless crab with a hangover.

On the plus side, itʼs hard to get killed by a male black widow unless you disturb its web. Which means I should stop messing about with random spider webs I see on the way to get the mail.

I went to Starbucks today. I havenʼt been to Starbucks in 18 months. They spelled my name wrong, and screwed up my drink order, so really the only thing thatʼs changed is the furniture.

Theyʼve taken down the sign at Starbucks requiring everyone to wear a mask, so naturally, none of the customers have a mask. Somehow they assume that the lack of a paper sign means everything is OK.

Todayʼs coffee is Starbucks Christmas Blend. Not to be confused with Holiday Blend.

Holiday Blend is much more widely distributed than Christmas Blend. When I lived in Seattle, you couldnʼt find it at all. Here, itʼs available if you hunt for it, and I managed to get this one delivered.

Itʼs good. Iʼm not sure what makes it Christmassy. It doesnʼt taste of peppermint or elves or anything. Itʼs heavier than Blonde, but not going to mug you in an alley like Italian Roast. Itʼs just a shade darker than Pike Place, in my estimation. Itʼs a good coffee since I like my coffee the way I like my women: ordinary, but elusive.

Before Starbucks came out with the Blonde Roast, this was my go-to brew. I havenʼt had it in at least 15 years, and I can say that I understand why people who are used to Dunkinʼ Dishwater think Starbucks coffee tastes burned. Of course, itʼs not burned. Itʼs just a lot stronger than theyʼre used to, and itʼs espresso, not coffee, which they often canʼt wrap their brains around.

It took a little bit, but I think Iʼm used to it again. Itʼs certainly stronger than what Iʼve been drinking for the last year or so. It needs more sweetener than regular coffee, and doesnʼt take to Splenda or skim milk well. Youʼve got to go for the real stuff: Sugar and cream. Maybe thatʼs why people think Starbucks drinks are too tarted up. In reality, itʼs compensating for stronger bean taste. Thatʼs what we drink coffee for. After all, I like my coffee the way I like my women: strong and aggressive, like my college girlfriend who could beat six people in a bar fight and then spend the rest of the evening sewing herself a new dress. That was a fun six months.

Fun fact: Houston was where I first started to drink coffee, and Starbucks in River Oaks was my first Starbucks.

I started going to Tullyʼs when I lived in Seattle. There was a Starbucks next door to the building where I lived, but I liked Tullyʼs better because it attracted nerds and I liked to listen to their conversations and get inspired.

There was a Tullyʼs in the Xbox/Bing building across the street, and one in the REI headquarters across from where Darcie worked. Tullyʼs only existed in the Seattle area, and because of foreign investment, South Korea. Much like how Caribou Coffee only exists in Minneapolis and Saudi Arabia.

Tullyʼs is gone now. Starbucks ate Tullyʼs after it ate Seattleʼs Best. But because of those investors, Tullyʼs still exists in Seoul, and those people licensed the brand to Green Mountain, which is Keurig, which explains why I was able to find a box of Tullyʼs pods at Safeway.

Even though this is both French roast and decaf, it was really strong. Like needs an extra half-a-Splenda strong. But thatʼs OK, because I like my coffee the way I like my women: Rich and bitter.

I think the best recent Thanksgiving invention is the Thanksgiving panini at Starbucks. If you havenʼt had one, try it. Theyʼre a little better this year because they left out the cranberry sauce.

Iʼm so dumb, it only occurred to me yesterday that I can make all of the Thanksgiving paninis I want with my Thanksgiving leftovers!

Things like this are why self-absorbed attention seekers think itʼs OK to bring their pets into Starbucks.

Protip: If it doesnʼt use a toilet, it doesnʼt belong in a place that serves food.

At a time when America needs journalism more than ever, there's a sign up at Starbucks stating that today is the last day that it will sell newspapers.

I wish I had a coffee shop alternative, but such is life in an American suburb.

There are twelve people at Starbucks this morning.

I guess journalismʼs not dead after all.

Thatʼs why the chairs suck now

Remember when Starbucks used to pride itself on its carefully curated selection of music?

Now itʼs like playing crap is its latest way to keep people from relaxing in-store, and to just hand over their money at the drive through.

This is what happens when real estate developers run out of names.

“Yeah, hello, Pizza Hut guy? Yeah, take a left on Spiced Butter Rum, then a right on Macadamia Nut, then a left on Frapuccino… *click* Hello?”